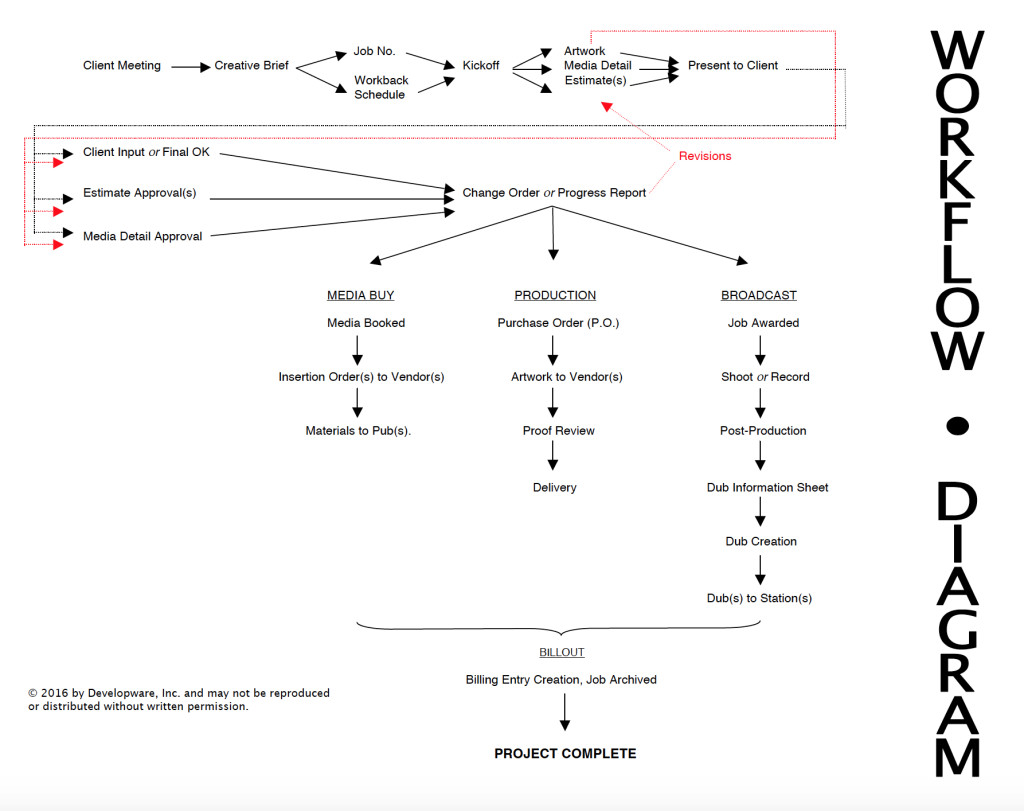 The assigned Account Executive (AE) meets with the Client and obtains project information.

The Client Contact Report (CCR) is submitted and the Traffic Manager (TM) is notified via Messages.

The TM opens a Job Number and manages the CCR, listing relevant parties in the cc: field.

A kickoff meeting is scheduled with the AE, Creative Director (CD), Copywriter, and Media Buyer or Production Manager. If no meeting is necessary, work begins.

Once creative is completed, the assigned team member reviews it with the CD.

The work is routed to the TM.

The TM routes the work to the appropriate AE or AC.

A Print and/or Production Estimate is reviewed with the CD. [If the Print estimate needs to be discussed with the AE, the Production Manager schedules a meeting.]

The AE and TM receive deadline and spec information from the Media Department via a Print Media Detail or Broadcast Summary.

The AE reviews the creative, Estimate(s) and media details and discusses changes with the appropriate people. [If no changes are necessary, the work is routed back to the TM.]

Comps are reviewed with the CD. If acceptable, they’re routed to the TM for handoff to the AE. [If the work needs to be discussed with the AE, the CD schedules a brief meeting.]

The AE presents the comps to the Client and receives creative input, Estimate approval, and input regarding the Print Media Detail or Broadcast Summary.

The AE outlines changes in a Change Order and cc:’s the appropriate people. If none are necessary, or there is other information to be relayed, a Progress Report is filed.

All parties cc:’d on the Change Order or Progress Report receive a Message.

Materials are routed to the TM. Simultaneously, the TM receives notification that the Change Order or Progress Report has been created.

If the Client has approved the Print Insertion Order or Broadcast Summary, the Media Department begins booking space and airtime.

If the Print and/or Production Estimate has been approved by the Client, the Production Manager compiles Purchase Orders (P.O.s) and contracts with vendors. If a broadcast project, the CD discusses director and voice selections with creative team members.

Once creative is revised, it’s reviewed with the CD. If no changes are necessary, it’s routed to the TM. [If the work needs to be discussed with the AE, the CD schedules a meeting.]

The TM routes the work to the AE or AC.

The AE re-presents the creative and, if required, Estimate(s) and media summary to the Client and receives final approval. If there are revisions, steps 20-29 are repeated.

The AE relays final approval via a Progress Report and cc:’s the appropriate people. In instances of broadcast, voice tapes are compiled for Client approval.

The work is routed to the TM. Upon Client approval of talent, the broadcast job is awarded and a pre-pro schedule is formulated.

The TM modifies the Workback Schedule. The shoot or recording session is held and a post-pro schedule is formulated. Final Client approval of roughcuts, music, etc. is obtained by the AE during the post-pro session.

The TM requests materials be loaded onto disk or posted to the job’s Creative Folder for downloading by the appropriate vendor(s). A Dub Information Sheet is completed by the AE and routed to the broadcast producer for dubbing.

The TM alerts the Production Manager or Media Department that creative has been posted. They, in turn, alert the appropriate vendors. In instances of broadcast, dubs are made and handed off to the TM who, in turn, gives them to the Media Department for distribution.

A proof is received and given to the TM by the Production Manager.

The TM routes the proof to the CD, creative team member(s) and AE for review.

Upon approval, the TM returns the proof to the Production Manager for vendor delivery confirmation.

Once the Production Manager has delivery confirmation, the TM is notified.

The TM requests that final artwork be backed up in some manner (e.g. placed on CD).

Materials are printed and delivered as specified by the AE and Production Manager.

The TM removes the job from the Active jobs folder by putting it to Sleep.

The project is complete.